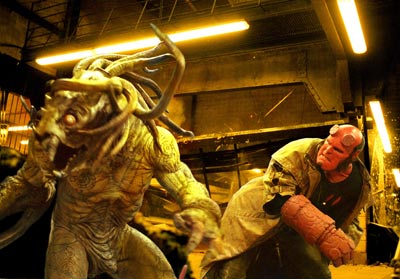 A monster that fights monsters, Hellboy is a far cry from your virtuous tights-and-cape wearing superhero. A beer-guzzling, football-watching, regular guy, Hellboy is a more human superhero. That's saying a lot, considering Hellboy is a huge red demon who was meant to bring about the end of the world. Casting an actor to play Hellboy was a decision that del Toro couldn't make alone. He sought the advice and approval of the series creator Mike Mignola.

"Soon after we first met, I said to Guillermo, 'So who do you think should play Hellboy?'"

Casting the right actors is a challenge for any production. In many cases, it can make or break a film. In adaptation, the additional challenge is that the characters already have a very distinct look. An actor had to be found with the physical build of a monstrous, muscular hell-spawn, who was also talented enough to convey all the subtleties and conflicts of the complex Hellboy character.

"There was a little bit of sizing each other up -- like who's going to say it first. And we both said Ron Perlman at the same time. We both immediately knew Ron Perlman should play him. He's got Hellboy's demeanor. He's got that working stiff, been-there-done-that quality in almost everything he does. And he's got the perfect voice."

The actor Ron Perlman was the natural choice. With more than 80 productions under his belt in film and television, Perlman had the experience to play the role and the name recognition to draw audiences to the theaters. But there was more to taking the role of Hellboy than simply saying, "Yes."

Perlman was scheduled for six months of rehearsal and shooting. Performing action sequences and acting in full make-up requires tremendous energy. Perlman had to get in peak physical condition to both have the Hellboy look and the stamina to perform for hours at a time.

"Physically, I knew I was in for six months of fighting crime against monsters and demons -- the big dudes that Hellboy has to take down."

Perlman prepared for the role for almost a year. He spent five to six days a week in the gym doing cardiovascular exercises and working out to build physical strength.

"Hellboy has the physical body of a half-century-old red ape, but the heart and mind of a young teenager. He is very spoiled, he's very temperamental and he's very unruly. [Hellboy] is actually a lovable under-achiever. He was born with this enormous strength and immortality, yet all he wants to do in life is kick back with a six-pack of beer and watch football on TV with his girlfriend -- like a regular guy. Ron Perlman is Hellboy."