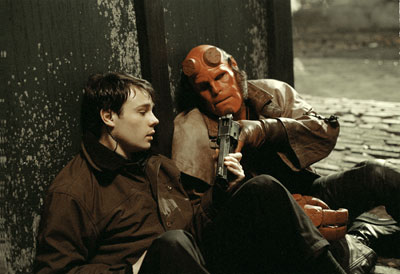 The film version pulls heavily from the "Seed of Destruction" mini-series to provide audiences with Hellboy's origins. Del Toro chose to elaborate on some of the themes that were not really developed in the comic.

The film expands on the father-son relationship between Professor Broom and Hellboy. The film also introduces a love triangle between Hellboy, his fellow B.P.R.D. agent Liz Sherman and the young FBI Agent John Myers. Del Toro created the character of John Myers to facilitate this plot point.

These choices are often difficult for a fan like del Toro, who is so passionate about all the nuances of the story. But whenever he ran into difficulty, del Toro had the ultimate guide in Mike Mignola.

"There were things I alluded to over the past 10 years in bits and pieces that were condensed. [I told Guillermo] change what you want. Make it your version of my thing... For instance, Abe Sapien [Hellboy's sidekick] is different from the comic book original. Guillermo gave him more personality and altered him visually. But he's certainly true to the spirit of what I did, whereas the [villainous] Sammael is completely a del Toro character. And in the climactic scenes where Hellboy and Kroenen duke it out, it's like a Mignola character fighting with a del Toro character."