When You Want Something Done Right… 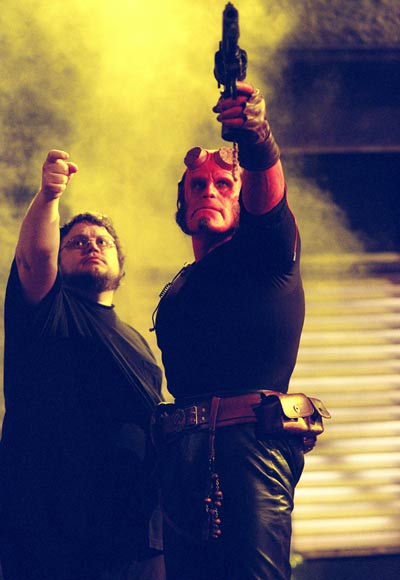 del Toro directs actor Ron Perlman, who portrays Hellboy.
Photo courtesy HB-042 = Egon Endrenyi © 2004 Revolution Studios Distribution Company, LLC. All Rights Reserved.
"I've always wanted to make a monster movie, and this one has outlandish characters and fantastic monsters and settings; but in order to have the audience connect with it, I had to find a couple of emotional through-lines."

Del Toro's first task in adapting the saga was to get a screenplay that could convey all the important elements of "Hellboy" in around 90 minutes. He needed a story that would appeal to fans of the comic book and connect with audience members who had never heard of "Hellboy."

"It was clear to me from the start that Guillermo was the only guy who could make this movie. He brings his own personality to it. He's one of a younger breed of directors who love comic books and take them very seriously. They understand them and see them as a legitimate film genre."

Writing the screenplay himself gave del Toro total control over which story elements from the comic were fleshed out and which were let go. It also allowed him to carve a plot that was true to "Hellboy" while still fitting it into the format of cinema storytelling.