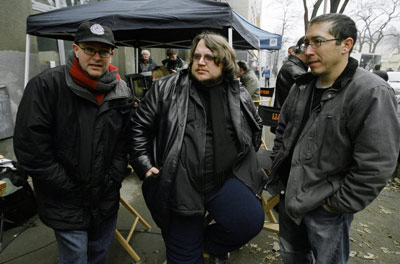 The "Hellboy" project is almost seven years old. Producers Lawrence Gordon and Lloyd Levin had the vision to see "Hellboy" on the big screen. The success of TV shows like "The X-Files" and "Millennium" reinforced the idea that a movie about the world's greatest paranormal demon detective would be successful.

They also knew that "Hellboy" rode a delicate line as far as being commercially viable. As a film, it would neither be a traditional comic-book movie nor a traditional action flick. The story had elements of horror, sci-fi, fantasy, and good old-fashioned monster movies. It also had a hero that people unfamiliar with the comic book may find hard to swallow. Lloyd and Levin both knew that the key to successfully adapting "Hellboy" would hinge on their ability to put the right person in the director's seat.

Guillermo del Toro was at the time a young director with a growing resume of impressive films in the fantasy/horror genre. He was also a huge "Hellboy" fan. When he got wind of a potential "Hellboy" project, he used all his resources to get a meeting with the producers. It didn't take long for Lloyd and Gordon to realize he was the man for the job.

"Not only did we respect the talent he'd already shown as a filmmaker, but we were bowled over by his understanding of the comic book and his enthusiasm. It's as if he'd been there, somewhere in the room with Mike every day since he first created it."