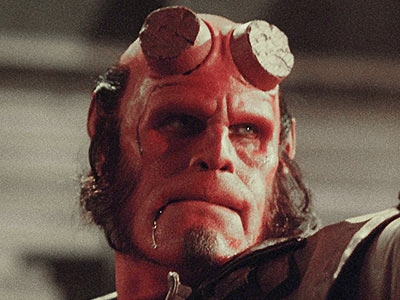 HSW: What kind of training do you have in this field?

Jake Garber: Well, I'm from Minnesota originally and I went to the University of Minnesota and studied theatre but I never graduated from there. As far as formal makeup training, I've never had any. I was always interested in it -- I was always a fan of horror movies. It was always ... go to the library and read any kind of article on it; studying old theatre books that had books on makeup and ... it essentially became a Halloween hobby gone bad. Talk to most makeup guys that specialize in this prosthetic work and most of them have a similar background.

I tended to sculpt a lot when I was growing up and draw little cartoons and the like. In Minnesota there's not many outlets for things like that. But actually I did get work up there. I was able to make a living out of high school just doing corporate training films. This was the early 80's and ... [I worked on] photo shoots, some theatre productions - anything to make a buck.

Jake Garber: Actually I thought it was a great training route because it forced me to do a little bit of everything. I had to do regular painting makeup, I had to learn how to make hair pieces, had to do prosthetic work - so it was a great training. After I had worked on a couple of films in Minnesota, I moved out to California in '89 or '90. I basically planned to show my book around and I didn't figure I'd get a whole lot of work.

I ended up getting a job at a shop making these walk-around masks for Universal Studios -- Frankenstein and The Creature from the Black Lagoon. So I found a job the first day I got out here and decided to stick it out for a while and subsequently just started. I could track every job I've had since day-one.