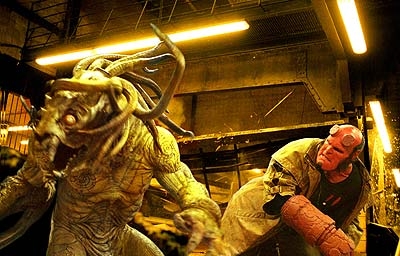 HSW: How did you get this project?

Jake Garber: I worked with him [Ron Perlman] on the previous Star Trek movie, Nemesis. We get along. Ron had mentioned it to me when we were doing Star Trek and I was interested in it, but usually you're kind of like, "OK, we'll see if anything happens with it." And, sure enough [it did].

It was going to go through the Baker shop and Ron requested me to do his makeup. I've worked with Rick in the past on The Nutty Professor so he [Perlman] got the blessing and I went and did a makeup test for him before I actually went to Europe to do another film. It was in October at some point and I got home from four months in Europe. I went to Prague literally the day after I left this one movie to do a second makeup test [for "Hellboy"] and started shooting two days later.