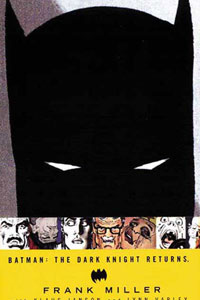 Batman, a.k.a. The Dark Knight, has been a Hollywood staple for many years. These days, audiences embrace the Batmobile, but also other graphic novels gone to the big screen.
Courtesy of DC Comics

Moviegoers know that Hollywood has sourced a lot of film material from comic books. Superman and Spiderman have been on screens big and small for a long time, of course, but graphic novels like "Watchmen," "X-men," "Sin City," "Surrogates," "The League of Extraordinary Gentlemen" and many others have also become major feature films.

Some graphic novel creators, such as Alan Moore, aren't fond of the live action adaptations of their work. Moore, in particular, believes that because film is a completely different medium, it can't accurately portray the nuances of graphic novels [source: Time Out Sydney].

In fact, film adaptations often veer wildly from their comic sources in content, another aggravation for the people who first imagined their plots and characters on paper. The same goes for loyal fans of the novels who want to see every detail of their favorite stories faithfully represented on the big screen.

Regardless of the opinions of authors and artists (and their fans), film studios see graphic novels as gold mines for big-screen material. The tremendous potential for incredible visuals, and the rich diversity and depth of characters and stories connect with many audiences -- fan and non-fan alike -- and their wallets.

For example, the "X-Men" movie series includes three films (with a fourth on the way), the first of which grossed more than $300 million worldwide and earned rave reviews from critics and movie fans alike.

TV producers love comics, too. Recently, the cable TV channel AMC fleshed out "The Walking Dead" graphic novel series, created by Robert Kirkman, Tony Moore and Charlie Adlard, into an epic, small-screen series about a zombie apocalypse. The show was a massive success in 2010 and is expected to last multiple seasons.

Digital innovations, too, are playing a role in the increasing popularity of graphic novels. You can find many graphic novels online for free, and some are even specifically designed for electronics such as Sony's PlayStation Portable and Apple's iPad.

These outlets give authors a new way to connect with digitally-savvy audiences that might not want to pay for (or wait for) printed volumes. And in our computer-saturated society, people are getting more and more accustomed to accessing digital media instead of hard copy materials, perhaps to the chagrin of some artists who might prefer that their readers see their work offline.

In other words, location matters. And traditionally, one location in particular -- school -- has been off-limits to comics and graphic novels. Next, you'll see how once-vilified comic heroes are plunging into the academic fray to save the day.