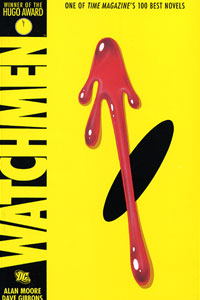 "Watchmen" is "Superman" for a new age. Nuanced and complicated, its characters feel their way through dark, morally complex plots.
Courtesy of DC Comics

Film has "Star Wars." Music has "Rhapsody in Blue." And graphic novels have "Watchmen."

Every medium has its most celebrated achievements and graphic novels are no different. There are numerous writers and illustrators known for their artistic prowess and masterpiece titles. As with traditional books, there are too many great ones to include them all here, but we'll mention some of the biggest names and can't-miss titles.

Writer Alan Moore and artist Dave Gibbons, along with colorist John Higgins, created the acclaimed "Watchmen," which cracked Time Magazine's list of the top 100 novels. "Watchmen" is a comic book series comprised of 12 issues that were later compiled into a single trade book. It constructs an alternate reality that uses a team of flawed, masked "vigilantes" (instead of almighty superheroes, which the novel satirizes) to explore ideas about power and control in a psychologically-wrenching manner.

Set in the Cold War era, Moore went after the big issues, such as human morality, philosophy, and the potential for worldwide nuclear annihilation. With its ominous tagline, "Who watches the watchmen?" "Watchmen" brought the medium a sense of adult-oriented artistry.

Frank Miller authored "The Dark Knight Returns," which, like "Watchmen," portrays its superhero (Batman) as a flawed human being instead of a perfect and indestructible icon. Miller paints a bleak world in which crime is rampant and the retired Bruce Wayne must pull out his Batman suit once again to bring balance and peace to Gotham City.

More outlandish fiction is also a strong seller in graphic novels. "The Mighty Avengers" includes a massively popular, evil-fighting character named Ironman. And in "The Incredible Hercules," the Greek protagonist must continually ward off challengers who want to harm the city of Atlantis.

Geography is no boundary for the popularity of graphic novels. For example, in Japan, readers voraciously devour manga, their version of graphic novels. Manga creators delve into every topic imaginable in hopes of capturing various slices of the huge manga fan base, which includes both men and women of all ages.

In fact, the popularity of manga has spilled over into the United States, where manga titles often challenge native language titles as bestsellers. But no matter where they're from, groundbreaking graphic novels aren't hard to find -- as you'll see on the next page.