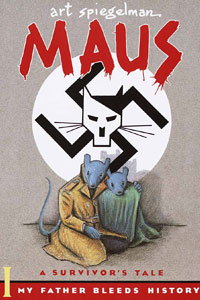 "Maus," a memoir that explores the personal impact of the Holocaust, won a Pulitzer Prize.
Courtesy of DC Comics

Thanks to the so-called Golden Age of comic books in the 1930s and 1940s, iconic superhero stereotypes are still strongly linked to the comic book genre. Because they'd rather avoid those stereotypes, some graphic novel artists purposely avoid using the word "comics" or "comic book" to describe their works. Instead, artists and their critics sometimes search for new words, such as graphic literature or graphic memoirs.

Those linguistic acrobatics are largely semantics. The reality is that comics and all of the other manifestations of sequential art encompass a whole slew of genres and styles. There are action and superhero graphic novels, of course, but there are also stories of mystery and drama, horror and romance. These novels target all age groups, from children and teens to adults.

Graphic novels can be fun and flippant, grave and important, or anything in between. Graphic novels can wrestle with all of the same complicated topics that novels address. And graphic novels can employ an entire range of literary devices, such as symbolism, foreshadowing, flashbacks, anthropomorphism, plot and metaphor.

In some cases, the text may be largely autobiographical, yet in a way that defies easy categorization. For example, Art Speigelman, author of "Maus," used the medium to relate true stories about his father's experiences during the Holocaust.

In his book, Jews are portrayed as mice -- the Nazis, as cats. For this gut-wrenching memoir, Speigelman won a Pulitzer Prize, the only one ever bestowed on a graphic novel. But there was certainly nothing stopping Speigelman from releasing this work in a long series of comic books instead of a graphic novel. That's just the medium he used to express himself.

There is, however, one consistent differentiating factor of regular comic books and graphic novels, and that's the place they're sold. Street newsstands often sell comics, but to find graphic novels, you'll have to visit a comic book shop or bookstore.

Now that you understand the scope and potential of graphic novels, head over to the next page to see some stellar examples -- and why it might be worth your while to plunder the graphic novels section at your local bookstore.