Dragon*Con takes place each year on Labor Day weekend. It's the South's biggest science fiction and fantasy convention, and its annual parade draws a crowd of local residents and fans from all over the world.

Many of the people who march in the parade have made their own costumes (heedless of the summertime heat and humidity typical to Atlanta, Ga.).

Just behind the piper and the Dragon*Con banner are the flags.

We don't remember seeing this kid before …

Some of the parade groups are in it for laughs.

Sleestaks. And Frank-N-Furter. We're not sure we understand, either.

The Dude really should not be behind the wheel.

This year's marching band presence has once again been brought to you by the Seed & Feed Marching Abominable.

… and shows us that being in marching band is meant to be fun.

Left to right, Batgirl, the Batmobile and Batman.

The Leagues of Heroes group was vast.

And not to name any names, but this guy's back was in every shot we got of them, except the previous one.

The Arms of Middle-earth crew is probably as excited as we are about "The Hobbit."

You can't take these guys anywhere.

We can't imagine how hot it is inside that pony suit.

Legend of the Seeker.

From the "Firefly" universe, Kaylee in a dress that looks like she bought it in a store, and Jayne in a very fetching hat.

I'm not sure if Jayne is waving or if he doesn’t have time for us.

We wonder if the couple under the "Just Married" banner are the ones who got engaged during the parade in 2011.

The Doctor Who group seems to get bigger (on the inside) every year.

A TARDIS and a very determined Doctor.

Hey. UNIT dude. Down in front.

We hope the guys in this tank had on ear protection. Its gun effects were loud.

Riding in cars is for famous people.

Riding in cars is for famous people and people whose cars have guns mounted on.

Risky to have so many red shirts when beaming down into this heat.

The Society for Creative Anachronism.

We feel sorry for the two people pulling that chariot.

You can't take these guys anywhere, either.

Additional musical accompaniment is provided by this drummer.

It's time for Disney!

We applaud you for still looking so happy after wearing those shoes for the entire parade.

Not entirely sure why Shrek is in with the Disney costumes.

From "Avatar: The Last Airbender," a water bender.

You can also ride in a car if you are a cardboard Optimus Prime.

Glinda the Good Witch and a cat have appeared from somewhere.

May the odds be ever in your favor.

They ain't afraid of no ghosts, but we are afraid of heat exhaustion in that Stay Puft costume.

Mario and Luigi also ain't afraid of no ghosts.

This is when the children at the front of the crowd started to get nervous.

All clear on the ecto front.

This sign, it does be quite false. The parade has half an hour to go yet.

The Fans for Christ group was placed, ironically or no …

… just ahead of the skeptics.

Or it's possible that the skeptics were there to act as a buffer between Fans for Christ and James Randi.

Lou Ferrigno poses for the media.

With those shields arranged that way, you can imagine these guys are fully clothed.

It's possible that there was singing going on.

The most impressive thing about this unicyclist is that the parade stopped for about 10 minutes just here, and he did not topple over.

Homestuck is a webcomic. We looked it up.

Just like in the books, we don't know who these guys are without it written down somewhere.

Remember how the kids were nervous before? Now is when they started to cry.

Objects in mirror may be closer than they appear.

Hope nobody is afraid of clowns.

An even scarier clown than the previous scary clown.

OK, enough with the scary clowns.

Not sure if this guy is a good guy or a bad guy.

Now is when the crying children were gently led away from the parade.

No one took this guy up on this offer.

Does this count as a car? Our list of acceptable passengers is getting long.

The blood drive: A Dragon*Con tradition.

Half fandom, half rallying cry.

This many drow in the group is not a good idea.

See? A fight has already broken out.

A look not everyone can pull off.

Time to go back to the future!

*Some hoverboards not for use with some sets.

If we had one of these, we would drive it everywhere.

The Extraordinary Contraptions, a steampunk band.

A reasonable facsimile of a steampunk airship.

More steampunk. You can tell by the goggles on the hats.

If you trick your car out with steampunk stuff, you can drive it in the parade.

Are we still on Steampunk?

Anime and manga, a strikingly broad category for one parade group.

Go, Speed Racer! A shot we almost missed due to a battery change.

Atlanta has its own pirates and wenches guild.

Buttercup and Westley. Later on, he hollered, "As you wish!"

If you build a pirate ship capable of being towed, someone else can drive a car to pull it through the parade.

The Big Daddy will leave you alone as long as you don't mess with his Little Sister.

These guys look ready for a brawl.

While these three paused for a photo, the little kids in front shouted, "Halo! Halo!"

Proof that you don't have to quit putting on costumes and marching in parades just because you have a baby.

Her dress seemed to float.

"Planet of the Apes."

A. Zombie for president.

How many people rode through the parade in that?

As the tide turns to "Star Wars," the parade begins to wind down.

Having a droid in your car: a definite plus for getting it into the parade.

Cardboard costumes return for another year.

Sometimes, the best costume is just being yourself.

They've got us in their sights.

If the Stormtrooper allotment looks small this year, it's because everyone's tired from Celebration, which took place not long before. Also, somehow Glinda and that cat are back.

Because every parade should end with a (bad) Santa. 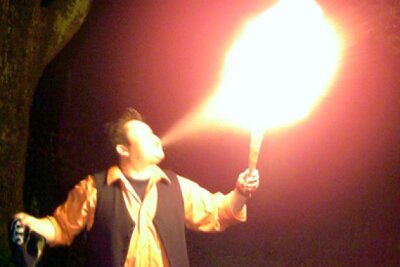 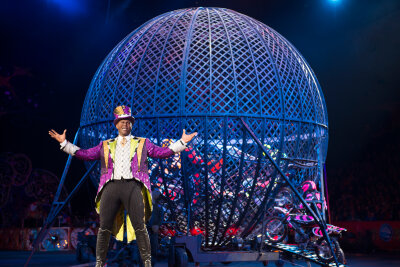 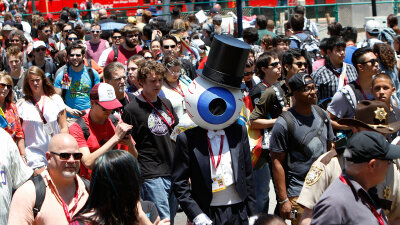