The Imminence of Comics 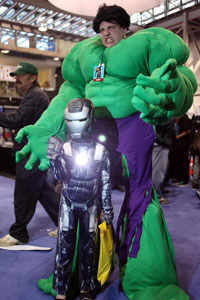 Comics aren't just books with a lot of pictures. They are a cultural phenomenon with a fanatical fan base.
Roger Kisby/Entertainment/Getty Images

Comic books are anything but a passing fad. Their long history and current resurgence means comics have become cultural touchstones that make appearances just about everywhere.

Classrooms and libraries used to be no-fly zones for Superman and Captain Marvel. These days, teachers and librarians actually leverage comics to pry into the minds of unenthusiastic or fearful readers. Sometimes, students who struggle with the written word digest literary devices like symbolism, themes and narrative better when there are pictures to help them along.

Comics are also useful for communicating non-fiction or biographical information. Politicians and celebrities are frequent subjects. For instance, a biographical comic due in late 2011 will detail the life of tycoon Donald Trump. The same publisher, Bluewater Productions, has already produced (or plans to release) titles about the lives of Barack Obama, Justin Bieber, and Jon Stewart.

And thanks to the Web, you no longer even have to visit a newsstand or comic book shop to find comics. Web comics are a genre unto themselves, with all of the unlimited potential of digital tools used to create them. In fact, many Web comic artists call the computer screen the infinite canvas, one that can be used to show the artistry of comics in a single panel, or innumerable frames with imaginative layouts and limitless storytelling potential.

Perhaps the infinite canvas is an appropriate phrase for comics as a whole. They've morphed from simple, one-frame beginnings to novel-length epics, to the movie screen, to the online world.

They've triumphed over "funny book" and superhero stereotypes, survived government suppression and even won over the very teachers who once banned them from English class. If all of this history is any indication, comic books will be here spinning their tales for a long time to come.

Special thanks go to Laura Martin and Brian Stelfreeze for their help with this article.