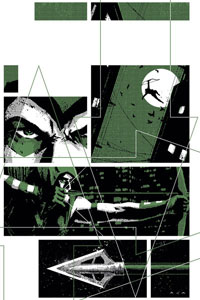 Plentiful white space presents an opportunity for your imagination to add to your comic book experience.
Courtesy of DC Comics

Comics have enjoyed so much success in the past two decades that in some form or another, they've infiltrated all parts of our society. Hollywood, for instance, is awash with comic book adaptations.

From "Spiderman" and "Watchmen" to "From Hell" and "Ghost World," comic books offer film producers plentiful material for on-screen action and suspense. Sometimes those films work spectacularly and translate into huge success at the box office.

It's clear that audiences can connect with comics that are brought to life on the big screen. Brian Stelfreeze said that when it comes to Hollywood hits, certain comics work better than others.

"I think comic book movies face a difficult challenge because they are generally as good as the material they come from. The problem is that we consume movies but we interpret comics," he said.

Stelfreeze thinks comics are a more immersive and interactive medium, one in which readers fill in the moments between panels, in effect providing the quality of directing and acting.

"The comic book often provides less than 10 percent of the story itself, so the quality is consistent with the reader's imagination. Movies simply are what they are. I believe the last Punisher movie was about as good as your average Punisher comic, but every reader has this fantasy Punisher in their heads that's much better than both."

Movies are hardly the last stop for comic books. Next, you'll see how comics are finding fame in other parts of America's cultural dialogue.