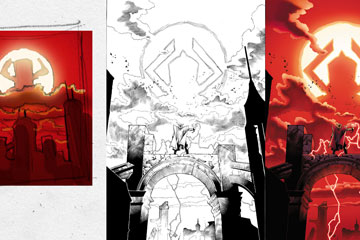 Oliver Coipel sketched this Mighty Thor #3 cover, Mark Morales inked it and Laura Martin provided color. Confused? Don't be. As you're about to find out, comic book creation is an exercise in teamwork.
Courtesy of DC Comics

Comic books aren't typically solitary creative pursuits. Instead, teams made up of a writer, penciler, inker, colorist and letterer often combine talents to make for the most compelling books.

Writers often conceptualize the plot of a comic book and write the dialogue and captions. They imagine the way the words and art play off of each other to create an impactful, cohesive story. Other times, the writers will collaborate extensively with the other artists in the group.

Pencilers draw the rough initial panels and characters that make up a particular comic universe. These may sometimes be just sketches, but they're the fundamental basis for all of the drawn art that follows.

Some comics teams also have inkers, who add to and enliven the work of pencilers. Using complex shading schemes, they use their creative flair to add drama and motion to each panel.

Colorists add color to the black-and-white drawings in each panel. Colorists choose a specific color scheme, or palette, that matches the mood and tone of the story. Dark hues might add drama, while brighter tones may add a sense of joy or wonder.

Laura Martin, a colorist for Marvel Comics, says that there are quite a few artists who take on the challenge of doing all of the work for a book by themselves. But when it comes to mainstream comics, which typically arrive at a rate of an issue per month, time restrictions make the team approach much more efficient. Most pencilers and inkers crank out roughly one page per day, so by the end of the month, a 20- to 30-page comic book is ready to go.

On the next page, you'll get the scoop on exactly how comic books come together -- and you'll see how two artists landed their dream comics jobs.

Every year on the first Saturday of May, a very special event happens just for boys and girls who have been extra nice. Actually, Free Comic Book day is open to naughty people, too, as comic shops everywhere give away certain titles for free. They do so to thank loyal readers and attract new audiences to their stores.