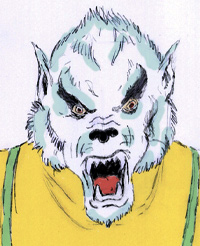 Comic Origin: Daily Bugle owner J. Jonah Jameson's son John is a promising astronaut who finds an alien gem on a double super-secret trip to the moon. This moonstone attaches to John's throat and causes him to change into a wolf-like beast whenever a full moon is present. Wolfman-like shenanigans ensue.

Comic Status: Spider-Man and Curt Conners (sans lizard form) cured Jameson of his transformations. He was recently fired from an asylum for super-powered criminals after several of them escaped.

Probability: Don't expect to see the Man-Wolf on the silver screen -- he's one of the lamest characters to ever come out of the werewolf mythology. It's a safe bet that John Jamseon stays unfurred.