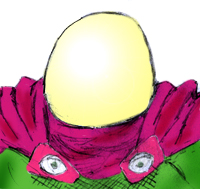 Comic Origin: Hollywood stuntman Quentin Beck decides to branch into special effects and gain notoriety by attacking Spider-Man as the costumed villain Mysterio. Through his mastery of smoke, mirrors, and various gasses, Mysterio begins a career full of numerous thrashings at the hands of both Spider-Man and Daredevil.

Comic Status: Died of self-inflicted gunshot wound after discovering a brain tumor and lung cancer caused by the products that he used throughout many years of attacking Spider-Man.

Probability: Slim. Does anyone really need to see someone in a purple and green costume wear a giant glass dome on his head and shoot gas out of his gloves on the big screen?