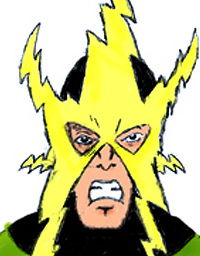 Comic Origin: Technician Max Dillon was repairing a downed power line during a thunderstorm when he was struck by lightning. Unlike the average 3,700 lightning-struck people in the United States who are turned to toast every year, Dillon gains the ability to manipulate electricity and has the ultra-original idea of using his newfound skills to perpetrate various criminal activities.

Comic Book Status: Electro agrees to be fried in an electric chair and emerges with jacked-up powers, only to be stopped by Spider-Man and imprisoned.

Probability: More of a team player than a number one baddie, Electro would fit in nicely with the addition of another heel a la Two Face/Riddler in Batman Forever. (Note: Stuffo does not condone Batman Forever. It is mentioned here for comparative purposes only.)