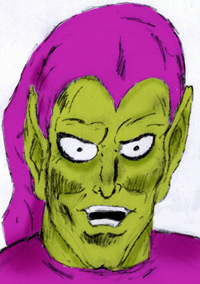 Comic Origin: A near-dead Norman Osborn gains super intelligence and strength while experimenting with his imprisoned business partner's secret formulas. Unfortunately, he also gains a good share of insanity and decides to take control of the criminal underworld under the guise of the Green Goblin.

Movie status: Apparently died in Spider-Man after being impaled by his Goblin Glider. Appears in Spider-Man 2 as one of Harry's hallucinations. Presumed dead, but...

Comic Status: After he was impaled by his glider, Norman Osborn finds that the formula that gave him his super-abilities also gave him uncanny regenerative abilities. He murders a drifter and places the body in the morgue as a stand-in for his own, then hides out in Europe for seven years before returning to destroy any hopes of continuity the Spidey-verse ever hoped to achieve.

Probability: Don't expect to see the original G outside of hallucination form anytime soon, but if the franchise starts lagging after the top tier villains are gone, a second run for Norman could be just what the spider ordered.