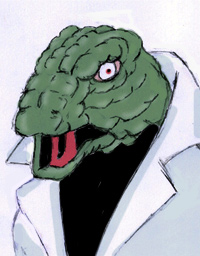 Comic Origin: After losing his arm to a blast while treating soldiers in the field, Dr. Curt Conners concocts a serum containing reptilian DNA to regrow the lost limb. Why not, right? Conners is successful in regenerating his arm, with the minor side-effect of turning into a giant mutant lizard when stressed out. The lizard side of Conners eventually gains its own personality and decides to (*yawn*) take over the world with an army of lizards.

Comic Status: Conners' estranged wife and kid show up and convince him to seek treatment for his condition after Spider-Man thwarts an attempt to enslave the world using tainted water.

Probability: With Kurt Conners already appearing in Spider-Man 2 (sans hand) as one of Peter Parker's college professors, things look good for a full-blown CG treatment of the half-man, half-reptile baddie. But unless he's playing second fiddle to the Green Goblin or Venom, don't expect to see this guy until at least sequel number 4.