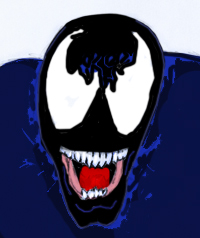 Comic Origin: While in space, Spider-Man is given a black alien costume to replace his badly tattered red and blue threads. Soon he discovers that his new costume is actually an alien parasitic symbiote that is trying to control him. Spidey breaks free of the symbiote at the top of a local church's bell tower with the help of high-frequency sound waves.

Meanwhile, journalist Eddie Brock is fired from his job at the Daily Bugle because he falsely identified a villain who was later captured by Spider-Man. His father then disowns him and his wife leaves him, so Brock takes the logical step of climbing to the top of the previously mentioned church tower to pray before committing suicide. There he merges with Spider-Man's cast-off symbiote costume to become a new villain -- Venom. Venom proceeds to continually torment Spider-Man, Mary Jane, and even Aunt May.

Comic Book Status: After a powerful alien separates him from the symbiote, Eddie Brock disappears. The alien symbiote is thought to be in Alaska...or a Hardee's.

Probability: Since the first film, fanboys have been foaming at the mouth for a big screen treatment of the V-man. And the cheap pop of a doppelganger story is money in Sony's pockets. While we may get a glimpse of Eddie Brock or even a brief cameo in Spider-Man 3, don't count on seeing Venom until after the Goblin storyline wraps up.