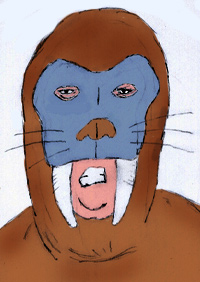 Suspect: Hubert Carpenter AKA The Walrus

Comic Origin: Bumbling idiot Hubert Carpenter is given the proportionate strength of a walrus after his janitor uncle experiments with stolen technology. Unfortunately, since a walrus is bigger than a man, he is basically slower and weaker than a common walrus. Led down the path of evil by his uncle, The Walrus spends his time getting constantly pounded by the likes of "The Fabulous Frog-Man."

Comic Status: The Walrus goes down for the count after being tapped in the head by Spider-Man. Presumably incarcerated.

Probability: Unless Joel Schumacher is allowed to helm a Spidey-film, no chance.