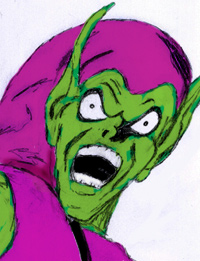 Comic Origin: Once Peter Parker's college roommate and best friend, Harry turned to drugs as a result of the pressures placed on him by his demanding father (the original GG). After falling off the wagon during an attempted recovery and witnessing Spider-Man kill his father, Harry snaps just in time to discover Peter's secret identity. With help from both a modified Goblin formula and hallucinations of his psychotic dead father, Harry makes it his goal to destroy Spider-Man.

Movie Status: Appears in Spider-Man 1 and 2 as Harry Osborn. Last seen discovering his father's costume and cache of weapons.

Comic Status: Died as a result of an unknown side effect of the Goblin formula after blowing up the Osborne mansion in an attempt to kill Spider-Man.

Probability: The end of Spider-Man 2 makes it a lock that Harry Osborn will show up as a variant of the the Green Goblin much sooner than later in the Spidey franchise. He's the clear favorite for Spider-Man 3.