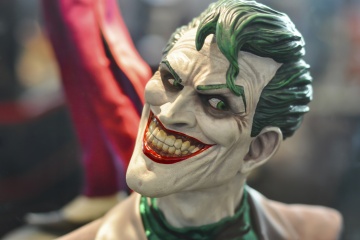 The thing about clowns is, they misbehave. In the right context that gets laughs. The problem is that somewhere in the back of our minds we worry that clowns can't be trusted. If they're licensed to break rules, what rules won't they break? It could be this suspicion that's behind coulrophobia, an unofficial term that refers to the fear of clowns. Of course, it doesn't help that clowns have been getting some really bad press for the past 40 years or so.

Things started to go downhill with the 1980 conviction of John Wayne Gacy, the notorious serial killer found guilty of murdering 33 people, mostly teenage boys [source: Kifner]. The fact that Gacy had a side gig performing as Pogo the Clown only seemed to add to the horror of his crimes. Ever since, the image of a killer clown appears to have been permanently branded on the cultural consciousness.

Inspired (or maybe haunted) by Gacy, author Stephen King created the terrifying Pennywise for his 1986 novel "It." Batman's nemesis the Joker had been around for decades before Gacy, but with Jack Nicholson's portrayal in the 1989 film "Batman," followed by Heath Ledger's unforgettable 2008 performance in "The Dark Knight," that perennial baddy has become increasingly malevolent. The latest incarnation of the evil clown is Twisty in the TV drama "American Horror Story."

Meanwhile, in a bad case of life imitating art imitating life, some French teenagers have taken to dressing up as clowns and randomly attacking innocent pedestrians, sometimes causing injury and nearly always scaring the daylights out of their victims [source: Goldhammer].

As more and more people report a reflexive fear of clowns, the reputation of the fun but harmless fool is ailing, so it's no wonder clowns are heading to the hospital [source: Gilbert]. But medical clowns don't go to work to heal the image of their profession. They're there to do what clowns do best: Make people laugh and forget their cares.

Those with an itch to travel and a desire to help people on a larger scale can volunteer for the remarkable organization Clowns Without Borders, which sends jesters into conflict regions around the world. Stress is one of the most serious issues facing kids in war zones, and if there's one thing clowns do well, it's lighten things up [source: Holmes].

Last spring, a clown terrified my 3-year old son. The odd thing was that he knew her. She was his dance teacher, and she'd costumed herself as a clown to MC an end-of-year recital. In any case, my son flipped and refused to go onstage, never mind perform. He doesn't know anything about Gacy or the Joker (call me overprotective), so his fear didn't have to do with cultural associations. It was her stark white makeup that got him. The masklike paint rendered her both familiar and strange, a petrifying combination as far as he was concerned. It could be that clowns who don that look, the classic face pioneered by Joseph Grimaldi, risk straying into the infamous "uncanny valley," meaning they have the creepy appearance of being nearly human, but not quite. Maybe that's why many modern clowns are opting for a minimalist get-up that includes nothing more than an old bowler hat and red ball nose — just a few touches to let you know they're real people with a very odd job.