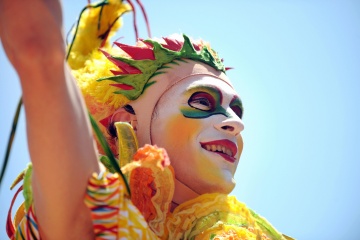 Professional clowning is no joke. Performers with Cirque du Soleil can earn up to six figures.
Gabriel Bouys/AFP/Getty Images

When most of us think of clowns, we probably think of round, red, ball noses, white faces, red smiles, baggy overalls and size-20 shoes. This is the look of Bozo, the self-described "World's Most Famous Clown," who had a lock on mid-20th century TV. The Bozo style is still very much around.

And if you've ever dreamed of running away and joining the circus, it turns out that it might not be a bad career move! While membership in the World Clown Association has dropped by a third in recent years, jobs are still available [source: Picchi].

If, for instance, you have a hankering to make as much as $92,000 a year wriggling out of a tiny car along with a dozen other lords of misrule in "The Greatest Show on Earth," you can apply to the Ringling Bros. and Barnum & Bailey Clown College [source: Picchi]. Along with your resume, you'll need an audition DVD that showcases your "ability to display exaggerated facial expressions ... athleticism or any unique physical skills, an understanding of your comedy, as well as a sense of your personality."

Meanwhile, that other behemoth of the Big Top, Cirque du Soleil, goes in for a wide range of clowning, from pure slapstick to specialists in physical theater. Salaries for all of Cirque's performers range from $45,000 to $200,000 per year and come with impressive benefits including health, dental and life insurance [sources: DeSimone and Cirque du Soleil].

If this sounds tempting and you want to get training in physical theater, there are few better places than the École Internationale de Théâtre Jacques Lecoq in Paris. Jacques Lecoq was a celebrated innovator in the world of clowning. Emphasizing the use of masks and improvisation, his training style is designed to teach students how to create their own unique approach.

The Parisian art clown is a world away from another mainstay of modern culture — the rodeo clown. While some rodeo clowns entertain the crowds during interludes, their main job is to distract the bull after a rider is thrown. It's a little more hazardous to your health than juggling, but the average rodeo clown can make somewhere in the neighborhood of $50,000 a year. That's not all that much if you consider the risk to life and limb, but it's a lot better than getting $15 an hour to clown at kids' birthday parties [source: Picchi].

But perhaps the most promising career in modern day buffoonery is that of medical clown. Medical clowns work in hospitals, using humor to alleviate the stress that often accompanies diagnosis and treatment. Believe it or not, you can actually get a bachelor's degree in medical clowning from the University of Haifa in Israel [source: Dream Doctors Project]! The training you get can lead to a job on a medical staff [source: Spitznagel]. Study after study has shown that having a clown or two bounce around a hospital is excellent for kids' health [source: Vagnoli].

And that's a good thing because, lately, clowns have been suffering from an image problem.