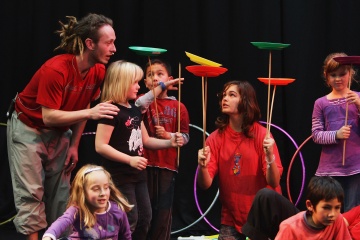 Sure, you could eat off that plate, but you might have more fun spinning it.
©Sandra Mu/Getty

When you think of circus acts, you probably envision trained tigers, human cannonballs and agile, airborne acrobats. But one circus act uses plates like the ones you eat off of every day. It's called plate spinning, and it's a mesmerizing testament to the creativity of novelty acts that rely on common physics.

Plate spinning is a circus act that typically involves spinning plates (or bowls, or other dishware) on top of wooden dowels. There are all sorts of variations on this act, such as spinning plates on their edges, letting them whirl about on a tabletop in a blur of motion.

Like juggling and acrobatics, plate spinning requires a mastery of hand-eye coordination and a whole lot of practice. The best performers can fluidly transition from a basic trick like spinning a single plate to much more advanced feats that incorporate multiple types of dishes on numerous surfaces, all at the same time.

Anyone who has ever washed dishes knows that plates aren't always the most cooperative objects. When they're soapy, they slip and crash onto the kitchen floor, often shattering into dozens of sharp shards. Yet for juggling acts, plates and bowls are perfect — they're symmetrical and generally well-balanced.

That makes plates suitable for use as gyroscopes. A gyroscope is a spinning object in which several physics fundamentals converge, allowing for some unusual and often counterintuitive effects, one of which means that a spinning plate can twirl rapidly atop a pointed stick. (We'll feast on more of the physics behind plate spinning later.)

Serving Up Some History 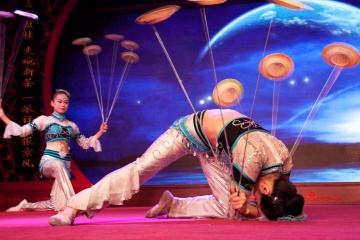 Plate spinning doesn't require a lot of fancy equipment or specialized skills. With a few common tools, just about anyone on the planet can give it a try. That's why it's tough to pin down the exact moment when plate spinning originated.

Spinning may have started about 2,000 years ago during China's Han Dynasty as part of a collection of variety acts. As the Han Dynasty unfolded, so did variety shows called the "Hundred Entertainments." These performances had magicians, jugglers and acrobats of all stripes, including plate spinners. Perhaps plate spinning had roots with village potters who made clay dishes. As part of mastering their craft, maybe they also learned to spin their wares on sticks to advertise their skill with the tools of their trade. Or perhaps plate spinning was an elaborate way to celebrate an annual harvest with the rest of the community.

However it began, plate spinning has a long history with Chinese acrobatic troupes. These performers typically work in groups, simultaneously twirling dishes with choreographed movements and contortions that add an extra element of difficulty and excitement.

In Western culture, plate spinners often work a stage alone. An assistant may help with setup and props, but the actual spinning portion of the act is frequently a solitary affair. Performers also may try to top each other's best tricks, spinning larger and more unwieldy objects such as tables or by spinning many different objects at the same time, or by tossing spinning objects in the air and then catching them again. 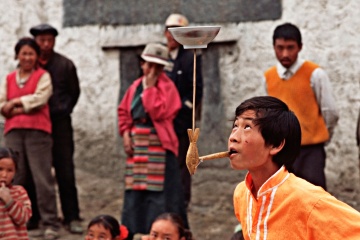