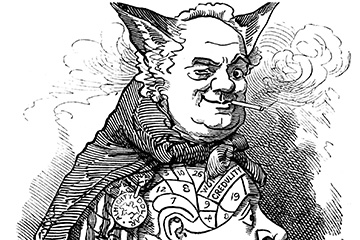 No matter how respectable Barnum wanted to appear, he would always have critics.
Ann Ronan Pictures/Print Collector/Getty Images

Barnum came across an African-American dancer named John Diamond, leased a theater and put a show together before trying his luck on the road again. Just as he had done with Vivalla, Barnum staged fake competitions between Diamond and other dancers, which again proved profitable — until Diamond abandoned him too. Fed up after becoming entangled in rivalries with other showmen, Barnum returned home in 1841.

But he still felt the call of the entertainment business. After selling illustrated Bibles proved to be a bust, he leased another theater for performances but still didn't earn much success. With a family to take care of and little money to go around, he was desperate. When he heard Scudder's Museum was up for sale, Barnum knew it was the perfect opportunity. At last, he envisioned a way to employ his showmanship skills while enjoying stability.

The problem was how to come up with the funds to purchase a museum. The owners of the collection wanted to get rid of it and priced it at $15,000. Although it was a steal, Barnum didn't have the cash. This didn't stop his resolve. When a friend asked him how he could possibly buy it, Barnum replied, "Brass, for silver and gold have I none" [source: Barnum].

Barnum approached Francis W. Olmsted, the owner of the building, and asked if he could purchase the collection in his own name and secure it to Barnum on credit. Olmsted investigated Barnum's references and agreed. Barnum then met with the administrator of the collection, John Heath, who agreed to sell the collection for $12,000 to be paid in installments. Barnum had succeeded — or so he thought.

Having no signed agreement with Barnum, Heath later accepted a better offer with investors calling themselves the New York Museum Company. Barnum claims in his autobiography that they were speculators who planned to sell stock and pocket most of the money. Like he had done so many times before, Barnum turned to the newspapers. He published hit pieces exposing the speculators and warning the public not to buy the stock. Meanwhile, he secretly arranged with Heath to buy back the property as soon as the investors' first installment payment was past due. To buy Barnum's silence, the New York Museum Company offered him a job, and Barnum took delight in verbally accepting the offer (to make them believe they were safe). A few weeks later, when they failed to pay their first installment to Heath, Barnum bought it back with Olmsted.

Now that he had his museum, Barnum finally had his chance to shine. The first order of business was to climb out of debt, which he did by living frugally for a year. Barnum credited his wife, Charity, for her support during this time, and he himself ate cold dinners, except on Sundays, until he was debt-free.