On the Road with a Travelling Circus 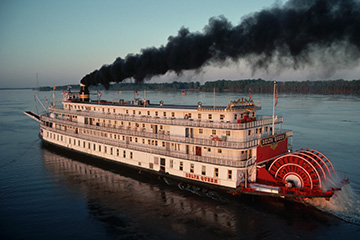 Never one for staying in the same place long, Barnum spent a few seasons entertaining customers on a riverboat..
Nathan Benn/Ottochrome/Corbis

In the spring of 1836, Barnum decided to join a traveling circus as a ticket seller. He shared a portion of the profits, and Vivalla joined as a salaried performer.

The circus encountered trouble along the way, including butting heads with local clergy who objected to their show. But the worst was when a mob nearly lynched Barnum in Annapolis, Maryland.

The circus proprietor, Aaron Turner, was a practical joker who enticed a mob against Barnum. Turner told the crowd that Barnum was in fact Rev. Ephraim Avery, a notorious man recently acquitted of murder (but who was nonetheless convicted in the eyes of public opinion). Barnum claims in his autobiography that he just barely got away with his life before Turner took back his story and the mob let Barnum go.

When he asked Turner why he did it, Turner claimed it was good for business, saying, "All we need to insure success is notoriety" [source: Barnum]. Indeed, he was right, and audiences flocked to the show to see the circus managers who played such jokes on each other. (Barnum did eventually get revenge on Turner with a less dangerous practical joke.)

After six months with the circus, Barnum decided to go off on his own with Vivalla and a blackface singer and dancer named James Sandford. When Sandford left the show suddenly, Barnum replaced him, putting on blackface and singing himself. Later, with the makeup still on, he tried to break up a fight and (according to his autobiography) was nearly shot, until he revealed himself to be white.

Barnum soon acquired horses and wagons and hired a clown and an African-American singer to join his troupe, dubbing it, "Barnum's Grand Scientific & Musical Theater." They traveled the American South until the next spring and then disbanded. After a few months at home, Barnum hit the road again in the summer of 1837. He bought a steamboat and hired a crew, giving performances along the Mississippi River over the winter. The next summer, he sold the boat and returned home, having learned much from his adventures but longing for a more "permanent, respectable" business [source: Barnum].

Back home in New York, Barnum longed for stability. He took out an ad seeking a partner with whom to invest his money. He finally settled on a man named Proler who manufactured paste, cologne and grease. It seemed to do well at first, but after funds ran out and it was clear the company was failing, Proler abandoned him. Meanwhile, Barnum had continued to look for talent.