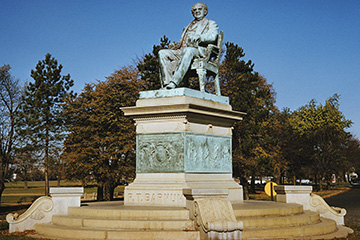 Barnum had caught the entertainment bug. While still on tour with Heth in Albany, Barnum encountered Signor Antonio, a talented balancer, plate-spinner, stilt-walker and juggler. He took on Antonio as a client and convinced him to change his stage name to the supposedly more exotic Signor Vivalla.

Barnum published a notice of Vivalla's talents in the Albany papers and sent copies to theater owners, but with little response; the act wasn't unique, so Barnum had trouble selling it. He was so confident in Vivalla's superior talent, however, that he offered a free performance to a theater and assisted Vivalla onstage himself. The plan worked, and the theater hired him to perform for the rest of the week. Although new to the business, clearly, Barnum had a natural gift for identifying talent.

The pair travelled down to Boston, Washington and Philadelphia, encountering mixed success. The people who came were thrilled with the act, but overall attendance was low. Barnum had to entice interest again. He found his next idea in an unexpected situation.

During one performance, a rival balancer and juggler named Roberts sat in the audience and started hissing and heckling Vivalla. When Roberts claimed he could do better, Barnum was inspired. Barnum offered $1,000 to anyone who could perform Vivalla's act in public, and Roberts accepted. After arranging with a theater to share profits, Barnum approached Roberts and offered to employ him. So while Barnum advertised a live competition between rivals, behind the scenes, Barnum, Vivalla and Roberts collaborated to stage the performance. The show was a hit, and performances went on for a month.