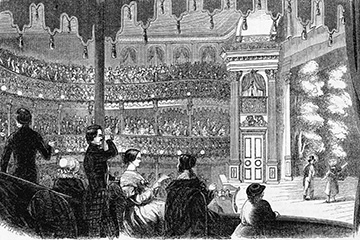 Once he got into politics, Barnum used his museum to stage speeches and other events.
Historical/Corbis

In 1861, the Civil War erupted in the United States. Barnum, who had previously been a Jacksonian Democrat, had owned a slave (Joice Heth) and up to this point had adhered to the common practice of banning African-Americans from his museum, now became an ardent Unionist. Accordingly, he used his museum as a political mouthpiece, featuring patriotic speeches and plays. Union war heroes and spies lectured about their experiences. Supporters of the South, called Copperheads, often protested the museum and threatened Barnum's life.

Considering Barnum's public appeal and talent for speeches, rhetoric and (some would say) manipulation, it seemed fitting that he enter politics. In April 1865, he won an election to the Connecticut General Assembly. During his tenure, he rallied for the ratification of the 13th Amendment to abolish slavery, and he supported the right of blacks to vote in Connecticut.

A few months after his election, Barnum's cherished museum burned down, along with most of his exhibits and animals. But neither a new career in politics nor a burned-down museum was enough to keep Barnum away from show business. He opened a new museum just two months after the fire. Unfortunately, three years later in 1868, this museum burned down, too, and Barnum opted not to rebuild. Although he didn't have a museum anymore, he was eager to get back into show business. The 1870s were to mark yet another phase in Barnum's life, a phase he is now perhaps best known for — the circus.

In 1879, Barnum sponsored Connecticut's Comstock Law, which banned contraception. This law remained in effect until it was famously overturned in the 1965 U.S. Supreme Court case of Griswold v. Connecticut.