A Reversal of Fortunes and War 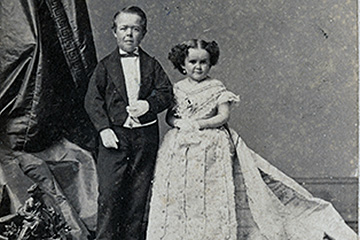 The 1850s were not as kind to Barnum as the preceding decade. During this time, Barnum bought up land next to Bridgeport, Connecticut, planning to build up the new city of East Bridgeport. In 1855, he invested in the Jerome Clock Company and sought to relocate it to East Bridgeport, but it turned out to be a disastrous financial move. The company went bankrupt, and Barnum found himself on the hook for much more than he intended to invest. Suddenly, he was broke. He was forced out of his mansion in Bridgeport, and to make matters worse, the unoccupied mansion burned down after workmen caused a fire in 1857.

Ironically, or perhaps fittingly, he was able to pull himself out of debt by going on tour giving lectures on "The Art of Money Getting." He sold his museum collection, but he transferred the lease to his wife's name, so they received some income from subleasing. On one occasion, he purchased a freshly dead whale and brought it to the museum in exchange for a cut of the profit. In 1857, he even returned to Europe to tour again with Charles Stratton.

By 1860, after five long years of clawing his way out of debt, he was able to buy back his museum collection. He was soon up to his old antics, acquiring the first hippopotamus displayed in the United States, then showing two live beluga whales in large tanks in the museum basement. Barnum found another little person, George "Commodore" Nutt, to take up where Tom Thumb left off, and President Lincoln invited the pair to visit him at the White House.

In 1863, Charles Stratton married Lavinia Warren, also a little person who had worked for Barnum. They went on to adopt a baby, and Barnum featured the family on display. When the child got bigger, however, Barnum would borrow other babies to stand in as "Tom Thumb's baby."