Can you really tame a lion? 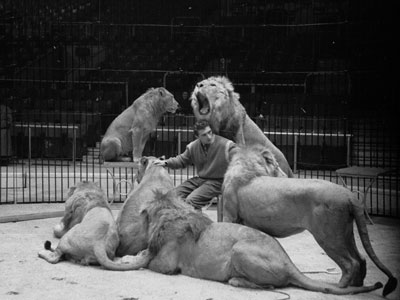 Trainer Joe Clavall, aka Tarzan, sits amidst some of his 12 Atlas lions and lionesses, while they rehearse for a show by Jack Hylton's circus at Earl's Court in London.
Maurice Amber/Stringer/­Getty Images

Millions of people have viewed the YouTube video sensation, "Christian the Lion," which shows the touching 1972 reunion between a lion named Christian and his former owners. Christian's owners had raised him from a cub until he was about a year old, at which time a conservationist helped them to introduce Christian to the wild. When they paid Christian a visit at the animal reserve, cameras were rolling to capture the lion's joy at seeing his former friends. Christian remembered them and even nuzzled their faces with affection like a regular housecat. Some people might think this is proof that humans can, indeed, tame wild animals. Is it?

For every Christian the Lion, there's a Siegfried and Roy. Known worldwide for the love and pampering they showered on their feline charges, Siegfried and Roy's successful Vegas tiger act ran for more than a decade. However, it ended in tragedy after one of the tigers attacked Roy Horn during a 2003 performance. To this day, no one is exactly sure what prompted their prize tiger Montecore to become aggressive. The cat attacked Horn so fiercely that he suffered partial paralysis and a crushed windpipe.

After his recovery, Horn insisted that the tiger was only trying to protect him from something -- perhaps a stroke suffered onstage -- and was dragging him offstage to safety. Others theorized an audience member's beehive hairdo distracted the tiger, or that a spectator provoked it somehow [source: AP]. Federal investigators never determined why the tiger turned violent. Whatever the cause, the incident illustrates that wild animals can be aggressive and unpredictable, no matter how lovable or docile they may seem. Siegfried and Roy raised Montecore from a cub and had worked with him for five years before the attack.