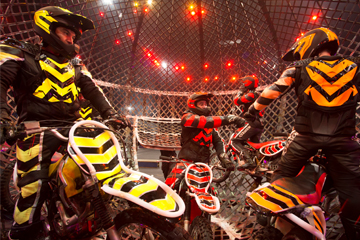 Most acts use dirt bikes in their Globes of Death, often from a mass-market manufacturer like Honda or Suzuki. They can't be too heavy or to huge; a nimble motorcycle is going to fly around the sphere far better than a beast of a touring bike with panniers and full fairings. The bikes also don't need high horsepower, since they only go 40 to 65 miles per hour (64.4 to 104.6 kilometers per hour), depending on the act. But they're also not usually governed, so their engines aren't restricted to limit their speed. The riders can decide how much speed they need to hold fast to the steel as they spin.

Erwin Urias says that he and his fellow riders "always use customized bikes." He and his brother have actually become mechanics so that they can make the tweaks that will perfect the tricks. As Urias pointed out, "These bikes are not meant to go upside down or ride around on their sides." They customize the engine, suspension, chain drive and more. Their act uses 125-cc Yamahas, but they've bumped the engine's output up to the equivalent of a 150-cc bike. Higher torque also becomes important when you've got to go from a dead stop to flying around the inside of a globe without falling.

People often assume there are tracks inside the globe for the motorcycles to follow; or even more odd, some believe that there are magnets in the wheels to hold the bikes against the steel cage. But according to Urias — and physicists and mathematicians will agree with him — a smaller globe simply requires less speed to make the trick work. As a rider's velocity increases inside the globe, the centripetal force increases. That force is what's keeping the motorcycle's tires stuck to the walls of the sphere. Speaking of which, there's also friction (no magnets required) between the tires and the inner surface of the sphere to take into consideration. As the rider goes faster, the resulting friction begins to cancel out the force of gravity acting on the rider and motorcycle. The whole act depends on centripetal force and friction, and those factors rely on velocity. If the rider goes too slowly, the velocity won't increase enough to out-do the force of gravity, and the bike and rider will tumble to the bottom of the sphere. This is that potential "death" thing we were trying to stay away from.