Scratching Out a Living 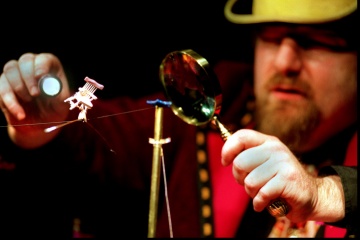 If you're put off by the idea of the fleas being harnessed or glued to their props, take heart: It's questionable as to how many contemporary flea circuses actually employ living fleas. After all, fleas are rather difficult to see without some sort of magnification, especially from more than a few feet away. It would be extremely easy to construct a tiny circus filled with props of every kind and pretend that fleas are interacting with those props, when in fact the fleas are not there at all.

That's exactly what some performers do, using electronics, magnets and other tools that stand in for actual fleas. The power of suggestion is mighty. Carnival types know and understand this. Perhaps it's no surprise, then, that many flea trainers have backgrounds in theater and magic. They have a knack for engaging and distracting their audiences with a deft sleight of hand.

Whether the fleas are real or not, one thing's for sure — it's getting harder and harder to find fleas suitable for the circus. Improved human hygiene and effective pesticides mean that household fleas are a rarity in first-world countries. They're so difficult to find that some trainers actually order them from overseas, praying that their little bloodsuckers survive the journey.

For circuses that do feature real, live fleas, there's still the matter of keeping them alive for as long as possible. And to survive, fleas require blood. So, some trainers roll up their sleeves and let their fleas have a go. It's typically the easiest and most convenient way for their charges to get a quick meal.

In spite of the give-and-take relationship of the flea circus, it's still easy to see how the fleas wind up with a raw deal. They're harnessed or even glued for the duration of their lives and expected to perform on command until they die. Regardless, there aren't any regulation banning flea circuses. The show will go on so long as the romantic nostalgia for sideshows lives in the hearts of quirky performers everywhere.

Fleas can jump about 150 times their own height. They'll put that incredible jumping ability to work as they pounce on anything resembling food. That might be your cat or your dog. And if don't treat your pets regularly to ward off fleas, the little buggers might wind up sucking on your blood, too. These are the sorts of thoughts that ran through my head as I sat in a good friend's home, watching fleas flickering wildly through the family dog's fur. I had plans that night to crash on their couch; after witnessing the dog's unhappy infestation I decided to make other plans very, very quickly.