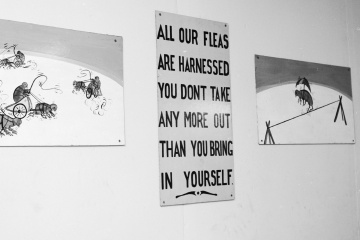 Don’t worry, folks! As this sign from a 1950s flea circus assures, the insects are harnessed and will not escape onto you.
© Sherman/Three Lions/Getty Images

Like all other living creatures, fleas vary in behavior. Some jump higher and run faster than others. Out of 10 fleas, perhaps only one is mobile and athletic enough for circus tricks and fame. So flea trainers watch their fleas to determine which ones are showing off their Michael Jordan moves. These ultra-active fleas will become the core of the next show.

Fleas aren't exactly doglike. You can't train them to sit or speak. So their "trainers" must find other ways to get their bugs to cooperate.

When they want to harness a flea, trainers often use thin gold wire or thread so thin it's nearly microscopic. Then the trainers can hitch their fleas to a variety of contraptions, one of the most common being little wagons or carriages that the flea tugs across the stage.

Glue, too, is a very useful tool for affixing harnesses to tiny bugs. Mock up a tiny fiddle or flute and then glue it to the forelegs of a flea and it will frantically "play" it for an audience's amusement. Vibrate the stage just a little and a gaggle of fleas would turn into a troupe of excited dancers.

Juggling is another easy trick. Position a yoked flea on its back, settle a smidgen of lint on its legs and it will flip it round and round. Suspend a piece of string between two little poles and the harnessed flea will do a bit of tightrope walking.

Flea trainers are notoriously close-mouthed when it comes to the finer points of their trade. Give away too many secrets of their craft, they say, and the magic disappears.