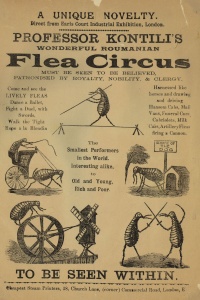 Advertisement for a flea circus circa 1900
© Hulton Archive/Getty Images

In the early 1900s, American William Heckler was one of the first imitators to find real success as a flea master. He called his fleas "skilled professionals" as they juggled, raced and boxed on his little stage. He named his favorite fleas and said that they responded to voice commands. He also told a reporter that in one good day of performances his little circus could bring in more than $250 in admittance fees, which these days would be well over $3,000.

Other copycats took their acts on the road, too, in the circuses and medicine road shows that traveled America. Over time, flea circuses became inextricably linked to carnival sideshows and county fairs, along with the likes of bearded ladies, human unicorns and camel girls. Some people were enthralled with dancing fleas. A lot of other people scoffed. But no matter their opinions, flea circuses became the stuff of sideshow legend.

Trainers invented more and more tricks for their fleas to perform. One flea might do high dives. Another appeared to read books. And one flea might even perform his own magic show routine.

The popularity of flea circuses has waxed and waned over the decades. Depending on where you live, you may be able to find modern-day flea circuses at a nearby fair or carnival. For example, one of the most famous and long-running flea circuses appears at an annual Oktoberfest celebration in Germany.