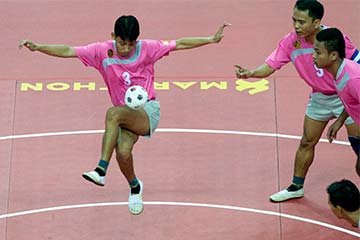 The Myanmar men's team competes with Thailand at the chinlone final of the 27th Southeast Asian Games in 2013.
Ye Aung Thu/AFP/Getty Images

Contact juggling is a new form of art and entertainment, with ancient roots. That's not too surprising, really, since balls have been around for millennia and are used by cultures around the globe. While the contact juggling performances you see today likely weren't done in the past, they do draw upon many elements common in ancient days. One of these is palm-spinning.

Thousands of years ago, during China's Ming Dynasty (1368-1644), small, metal "medicine balls" were used to help people recover from injuries or improve their dexterity. A person would take two or more balls in each hand, then rotate them in his palms. That's quite similar to the movements today's contact jugglers do when palm-spinning [source: Ministry of Manipulation].

Similarly, Myanmar spawned today's one-ball body rolling technique from chinlone, a popular performance sport-dance that's more than 1,500 years old. Teams competing in chinlone are judged by how well they can juggle a rattan ball. Players can touch the ball only with their heads, knees and feet, but more than 200 different ways of contacting the ball with these body parts have developed over the centuries. The most difficult are contacts made with the ball behind your back [source: Myanmar Insider]. Modern rhythmic gymnastics, likely borrowing elements from chinlone, appeared around the 1880s and became an Olympic sport in 1984 [source: Ministry of Manipulation].

While people have been playing around with balls forever, it was during the 1970s and 1980s that jugglers and other performers began experimenting with even more innovative forms of ball contact. In 1978, for example, Tony Duncan started using forearm rolls and a move known as a half-butterfly in his traditional juggling performances; in 1983, he debuted a one-ball contact juggling routine. Then, in 1985, performance artist Michael Moschen unveiled "Light." This routine is what really ushered in the "new" art of ball contact, or contact juggling, and many of the moves Moschen showcased in "Light" soon became contact juggling's core techniques, including palm circle isolations, snakes and trains, and the butterfly. Moschen was also the first performer, in "Light," to use clear balls in such a performance. Since then, contact juggling continues to attract ever-greater audiences, while performers constantly tweak the art form [sources: Contact Juggling Balls, Ministry of Manipulation].