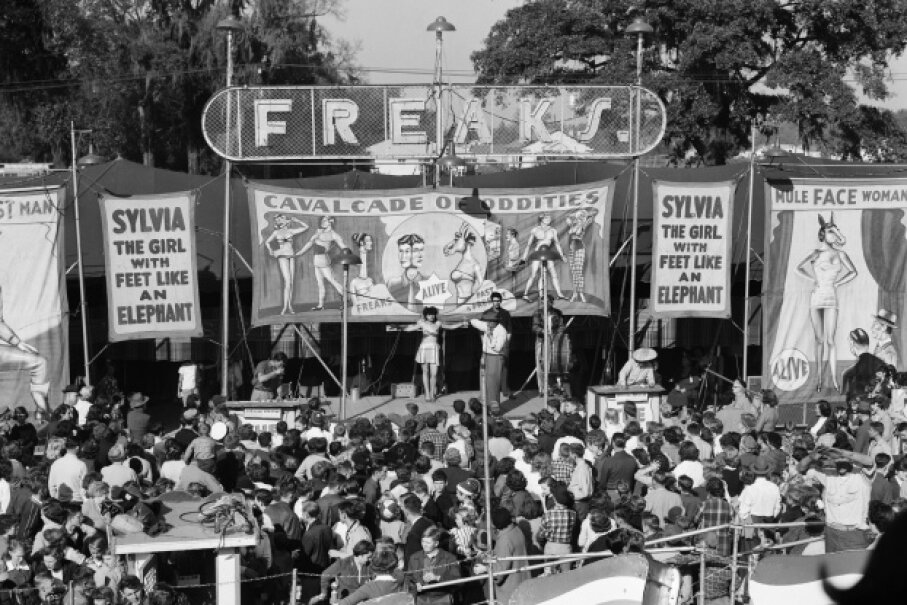 Over the years, sideshows have drawn large crowds, like this one in the 1950s. © C. S. Bauer/ClassicStock/Corbis

Let's start our list of famous sideshow entertainers by addressing language. "Freak" has long been a tricky word to use when describing folks in the sideshow community. It's no mystery that it has been used as a derisive, offensive term in the past, and it still can be a terribly hurtful word. Some in the performing community have embraced the term and rebranded it as empowering. We're not going to use the term to describe sideshow acts, although it should be understood that some performers are comfortable using it.

Now that's out of the way, let's have a little fun with the famous entertainers who made sideshows wildly popular in the 19th and 20th centuries. From rare medical conditions to a fearless stuntwoman, let's dive into the history of some performers who captured the public's attention and still have a place in the cultural psyche. 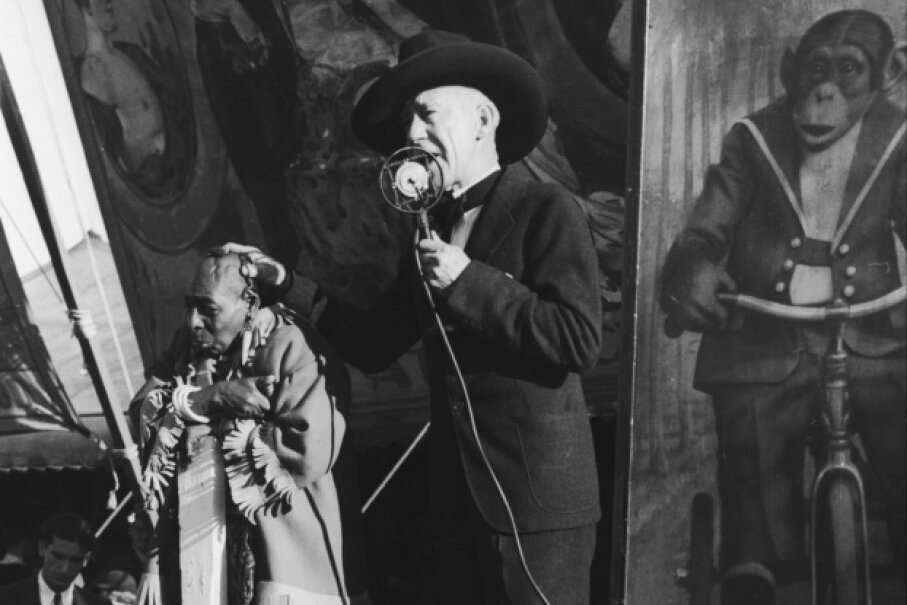 Schlitzie (sometimes credited as Schlitze) Surtees is best known as one of the actors in the 1932 Tod Browning film "Freaks." He played one of the "pinhead" characters — a term we would not use in modern vernacular. Schlitzie was born with microcephalus, a condition that causes an unusually small head circumference [source: Minnesota Dept. of Health]. Performers with the condition were often billed (inaccurately, of course) as the last of the Aztec or Mayan races or even as members of a race apart from man.

Schlitzie performed as a woman: Since developmental disabilities made him incontinent, a dress proved easier for diapering. Schlitzie performed with loads of circuses and even appeared in a film by Charles Laughton and Bela Lugosi. He was adopted by a chimp trainer in the '30s, but the trainer's daughter later committed Schlitzie to a mental hospital.

But the story doesn't end badly. Schlitzie was eventually found by a fellow circus performer, and he happily performed and lived on his own until his death at age 71 in Los Angeles [source: Pednaud]. 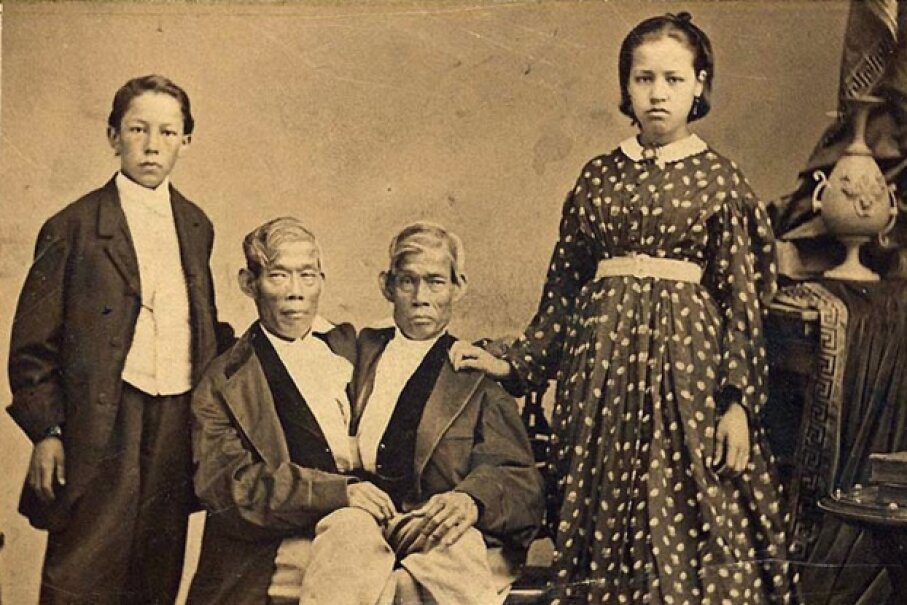 Chang and Eng Bunker, the namesake of the phrase “Siamese twins,” pose with their children. © Don Troiani/Historical/Corbis

Even those barely familiar with sideshow acts have probably heard of the famous "Siamese Twins," Chang and Eng. While "conjoined twins" is the preferred language these days, Chang and Eng introduced the condition to popular culture. Born in Siam (present-day Thailand) in 1811, the men were joined at the chest. They eventually traveled to America and Europe where they performed in numerous sideshows and traveling troupes [source: Nickell].

By 1838 the twins had retired and become thoroughly entrenched in their American lives, so much so that they purchased a Southern plantation and owned 33 slaves [source: Nickell]. They married sisters and supposedly had a strict schedule since their wives lived in separate houses on opposite ends of the plantation: They spent three days at a time in each house. Between the two of them, 22 children were born. Ever the opportunist, P.T. Barnum enticed them out of retirement in 1850 so they could pay for college tuitions. They took another tour of Europe together, but in 1874 Chang died in his sleep. Although the twins didn't share any organs, Eng died a few hours later [source: Pednaud]. 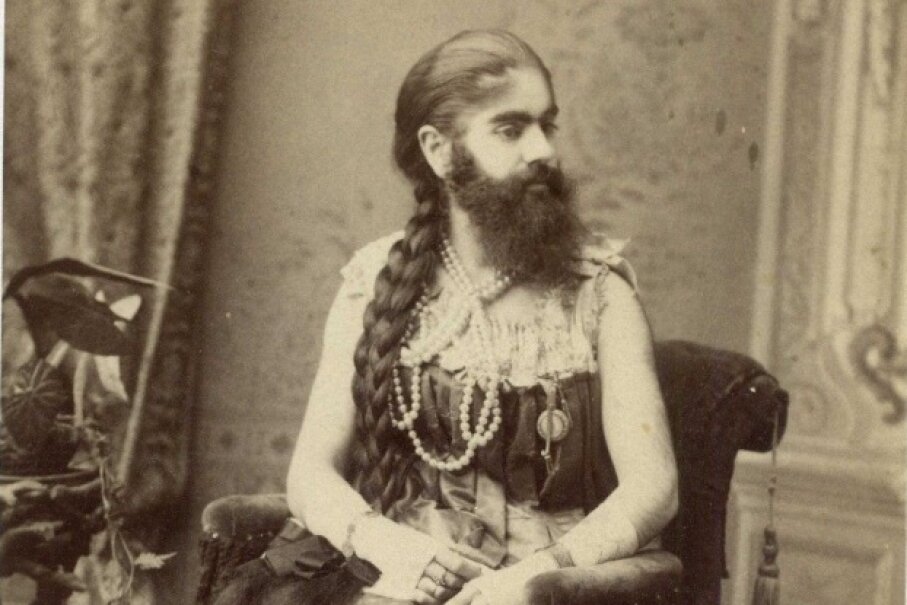 Annie Jones’ hirsutism made her a big hit in sideshows. Charles Eisenmann/Public Domain

A list of famous sideshow performers wouldn't be complete without a bearded lady. While there are several that fit the bill, Annie Jones nabs a spot simply for the longevity of her career. Jones was barely 1 year old when P.T. Barnum — who never met an atypical human he didn't want to display — convinced Jones' parents to let her be part of his museum show. Jones became the "Infant Esau," a reference to the Old Testament's famously hairy Esau.

Annie got a handsome sum for her appearances with Barnum, but she was kidnapped by a phrenologist who wanted to make money off displaying her. She was soon found, however, and spent 36 years working Barnum's shows and other venues. She performed as the Infant Esau, then the Esau Child and finally graduated to the Esau Lady [source: Pednaud]. She grew long hair to match her beard and also became an accomplished musician. 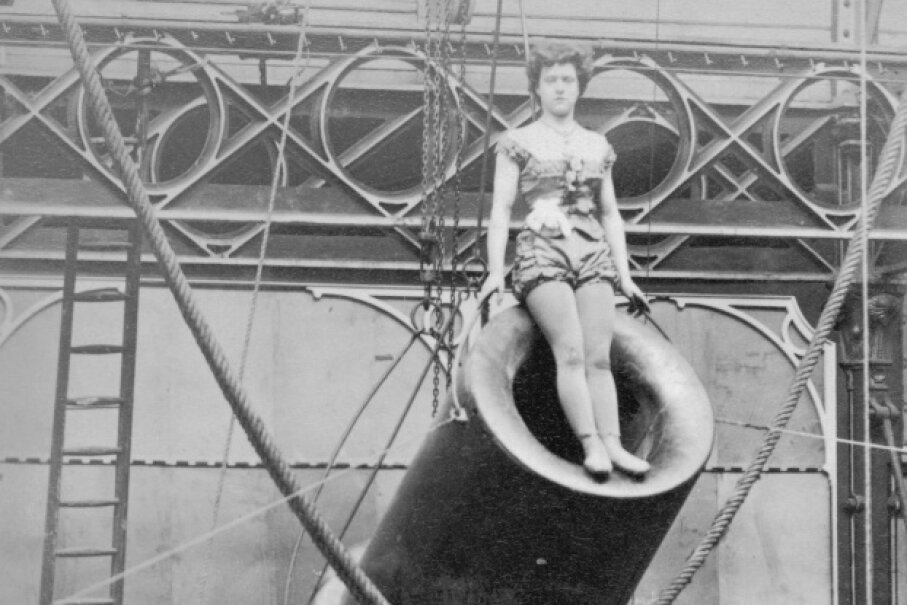 Zazel begins her act at the Royal Aquarium in London in 1877. Hulton Archive/Getty Images

While a human cannonball wasn't exactly considered a "freak" back in the day, it doesn't seem right to make a list of famous sideshow performers without including one. And hey, if we're using "freak" kindly — meaning something that is atypical — it's not so crazy to call Zazel (aka Rosie Richter), the first human cannonball, a little freakish. Most of us, after all, don't find ourselves yearning to be shot out of a cannon on any given day.

Not Zazel. A British aerialist, Zazel was the first person to be used as ammunition in an act. She was only 16 in 1877 when the first shot took place in the Royal London Aquarium, and she flew 70 feet (21 meters) in the air on the very first go [source: Pednaud]. The Great Farini, a well-known tightrope walker who made his way across Niagara Falls in 1860, invented the "cannon" that projected humans into the air [source: Niagara Falls Info]. The cannon exploded only to capture the attention of the audience —it actually relied on springs to throw Zazel across the ring [source: Pednaud]. While nets were used, Zazel ultimately missed a landing and ended up retiring with a broken back. 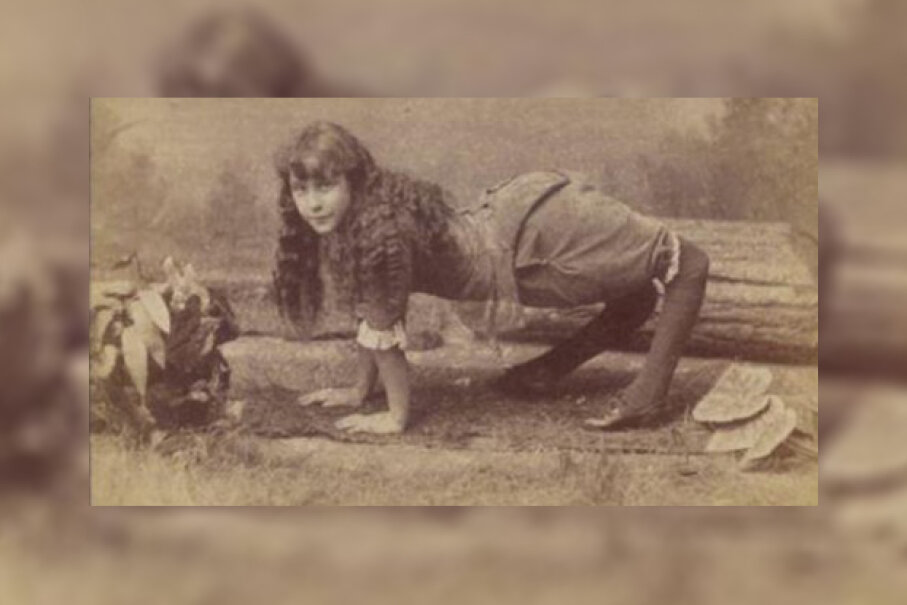 Because of her condition, Ella Harper preferred to walk on her hands and feet. Public Domain

Some of the sideshow performers we've listed were born with conditions that many of us are familiar with, like conjoined twins. But some performers have conditions that are quite rare and might still inspire curiosity today. Ella Harper, the "Camel Girl," had congenital genu recurvatum, a condition that caused her knees to bend backward. Because of the unusual structure of her anatomy, walking on all-fours proved more comfortable for Ella Harper.

Hence the "Camel Girl" nickname, since her knees and walking position supposedly made her resemble the ungulate with bent legs. In fact, Harper often appeared with a camel in her act to present a side-by-side comparison. The reality, of course, is that she was a regular adolescent girl who, by the age of 16, appeared to have quit the world of sideshow work to go to school [source: Pednaud].

There's no doubt that some performers were not as capable of making their own career decisions as others. Schlitzie, for instance, had several developmental disabilities and Joseph Merrick, also known as the Elephant Man, was trying desperately to make ends meet outside a London Workhouse. But other famous players happily chose their life in entertainment, and seemed to have a blast traveling and performing.