by Cristen Conger
Prev NEXT
4 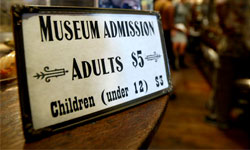 Sideshow freaks were the main attractions at turn of the century dime museums.
Mario Tama/Getty Images

In 1903, Bevan, then working as a nurse, married a farmer, and the couple had four children together. Bevan might not have ended up in the Coney Island Dreamland Circus Side Show and the Ringling Bros. Circus if her husband hadn't died unexpectedly, making her the sole breadwinner. Left a widow with four children in 1914, Beven entered and won a "Homeliest Woman" competition to earn extra household money [source: Hartzman]. To continue supporting her family, she parlayed her pageant title into sideshow work, and exhibited her deformed face on stage in front of cringing crowds until she died in 1933 [source: Danzig].

In 2006, a British doctor who noticed Bevan's face on a Hallmark card that mocked her acromegaly-marred visage became outraged and protested the indignity to the greeting card company. As a result, Hallmark quit marketing the "World's Homeliest Woman" for profit.