by Cristen Conger
Prev NEXT
6

Josephine Joseph; Half Woman, Half Man 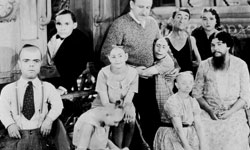 Director Tod Browning with the cast of "Freaks," including Josephine Joseph in the back left.
Hulton Archive/Getty Images

Austrian-born Josephine Joseph is a famous example of a sideshow staple: gaffed presentation [source: Springhall]. P.T. Barnum had few qualms about "gaffing," or faking, a freak in order to sell tickets. Did he, for instance, truly believe that Joice Heth had survived to be 161 years old? Doubtful.

A common category of the gaffed presentation at circuses and freak shows included the half-man, half-woman attractions. These men and women would exhibit themselves as intersex people (the preferred term for hermaphrodites), possessing the biological characteristics of both males and females. Josephine Joseph is one of the best-known "double-bodied" personalities, appearing in Tod Browning's 1932 film "Freaks." The right side of Josephine Joseph's body represented masculinity, cropping the hair short and wearing a strongman's leopard leotard. The left side embodied the feminine, sporting long hair, makeup and women's clothing and hosiery. Although little is known about Josephine Joseph's life outside of his or her career climax in the early 1930s, the sideshow freak was probably a male impersonator [source: Nickell].