by Cristen Conger
Prev NEXT
7 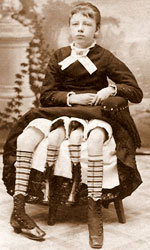 Myrtle Corbin was born in Tennessee in 1868 with four legs. Technically, the extra pair of legs belonging to Corbin's dipygus twin that failed to fully develop. Between Corbin's own legs dangled two small, unusable ones attached to its own pelvis. The girl's family quickly realized Myrtle's money-making potential and got her into the sideshow circuit at age 13.

Exhibited by P.T. Barnum, Coney Island, Ringling Bros. Circus and other attractions, Corbin and her extra set of limbs amazed audiences. To counterbalance her "monstrous" form, her promotional "pitch book" (a kind of personalized freak show program featuring an entertainer's photos and backstory) emphasized Corbin's demeanor, describing her as "gentle of disposition as the summer sunshine and happy as the day is long" [source: Bogdan]. Clearly, the marketing angle worked, and Corbin earned about $450 per week at her peak [source: Hartzman].

Corbin's popularity coincided with the rise of teratology, or the study of physical abnormalities (caustically referred to as "monstrosities"), making her famous in the medical world as well. Articles detailing Corbin's physical condition and her first experience with childbirth in 1889 were published in medical journals, including the Journal of the American Medical Association, the British Medical Journal (now BMJ) and the American Journal of Obstetrics, which described her as belonging to "a class of monsters by fusion" [source: Bogdan].