by Cristen Conger
Prev NEXT
1 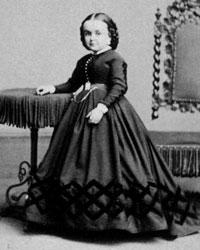 When Lavinia Warren tied the knot to General Tom Thumb in 1863, President Abraham Lincoln hosted the diminutive newlyweds for a wedding reception at the White House. The New York Times gushed over the 32-inch-tall "Queen of Beauty" and her nuptial finery in a novella-length article [source: The New York Times]. The joyous -- and heavily publicized -- event marked the climax of the sideshow age, and the closest Victorian America would come to embracing a so-called freak as one of their own. The couple had broken out of the circus tent and attained genuine celebrity status.

P.T. Barnum began exhibiting Charles Stratton, aka General Tom Thumb, in England in 1843 when the little person was only 11 years old. Twenty years later, he was one of the most famous freaks in the world, and his wedding to Lavinia Warren was largely a publicity stunt orchestrated by Barnum. Meanwhile, Lavinia Warren had begun traveling in 1858 with a maritime dime museum owned by her uncle, and in 1862 she joined Barnum's brigade at the American Museum in New York [source: Bogdan]. Soon after, Stratton spotted Warren and became romantically interested in her, much to Barnum's delight. Once the couple announced their engagement, American Museum crowds swelled to catch a glimpse of the petite bride-to-be [source: Bogdan]. After Stratton died in 1883, Warren remarried to another little person performer, Count Primo Magri, but the fanfare for freak shows and their stars had since faded.