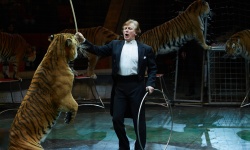 How can we discuss the circus without mentioning animal acts? While we can't pretend they're not extremely controversial, there's no getting around the fact that they're also a wildly popular attraction in the circus ring. And while (most) acts run like a well-oiled machine, there's a method that goes into the madness of coaching wild animals into submission.

How we treat animals plays a part in how safe the humans around them will be. That's why, for instance, sick elephants must receive medical attention and the blessing of a veterinarian before performing [source: Nelson]. Big cat trainers generally claim to use operant and classical conditioning (as opposed to physical violence) to make their animals perform safely. And be warned: We're getting into controversial territory here. Although there are some strategies to keep animals, and thus audiences, safe, many would argue that these strategies are not enforced or effectual.

2: Preparing Plans A Through Z

So we talked a little about fail-safe mechanisms or actions that would result in a "safer" accident, but nearly every act has one — or 50. From emergency cut-off switches, to humans keeping an eye on performers, to the harnesses and rigging that keeps performers aloft, there's a lot of double-checking to make sure anything that goes wrong still ends up right. And sometimes that happens before our very eyes.

What audiences don't see is that performers might be working from Plan B — or C, D and on down the line. When doing multiple shows a week, performers and crew don't have the option of just learning the "normal" plan: They have to be prepared for complications. That's even more important in acts that use mechanical devices. Any mechanical element they use needs a backup plan, because simply shrugging when it doesn't work isn't an option. Performers and crew rely on a strategy to make sure the performance can either carry on or finish safely.

And how are all these back-up plans formalized for performers and crew? Practice.

It's undoubtedly the biggest circus safety strategy that you, starry-eyed audience member, will never see. Rehearsal is the most important part of any circus safety program, and it goes beyond just practicing the routine. Proper preparation is key, and that includes a lot of physical training and workouts. After all, exercise trains your muscles, and cross-training helps defend against overuse injuries.

As we mentioned before, many acts have to deal with the possibility of failure or complications. That means performers have to rehearse the normal act, but they also have to practice how to adjust during snags. In fact, by running through multiple variations of a routine, performers and crew can be particularly sensitive to mistakes. It's that level of attentiveness and vigilance that helps keep a performance on track, even if something goes wrong.

To be fair, seeing all these safety strategies at work might just be as cool as the performances. (OK, maybe not as cool — but cool in a different way?) Watching a crew member properly rig and anticipate the needs of a performer seems like an awesome peek into the real circus life.