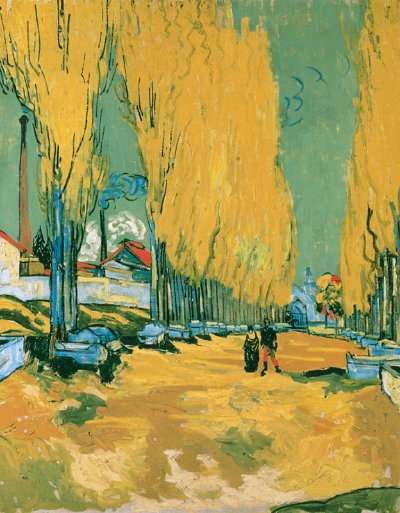 Les Alyscamps by Vincent van Gogh, is part of the Collection of Basil P. and Elise Goulandris, Lausanne.

Les Alyscamps by Vincent van Gogh was completed in 1888, and shows a view down the Allee des Tombeaux, the poplar-flanked path between rows of ancient sarcophagi, in which Vincent van Gogh portrayed two lovers taking a stroll. The woman in Les Alyscamps wears the distinctive local costume, while the man's uniform identifies him as a Zouave whose regiment was temporarily billeted in Arles. This adds a poignant note to Vincent van Gogh's's favorite motif of companionship. Soon the soldier would move on, and the relationship would end.

In October of 1888, Paul Gauguin arrived at the Yellow House as a guest of Vincent van Gogh. On the next page we'll see an unusual portrait that van Gogh painted during this time.