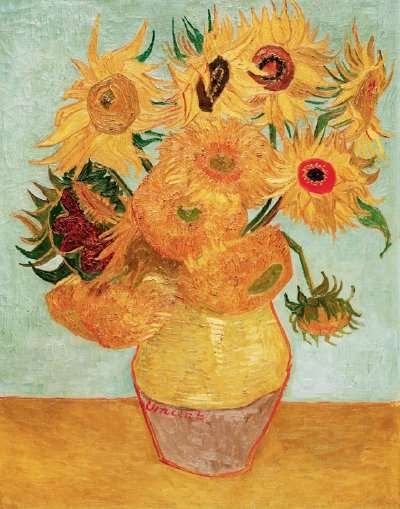 Still Life: Vase with Twelve Sunflowers 36-1/4x28-1/2 inches), can be found in the Philadelphia Museum of Art.

In his 1888 work titled Still Life: Vase with Twelve Sunflowers, Vincent van Gogh used his own paintings as models when he resumed his work after his self-mutilation. Van Gogh's sunflower still lifes became a source of consolation as well as inspiration.

He urged his brother Theo to send Paul Gauguin one of the paintings, remarking that his former housemate always liked them. In the sunflower, Vincent van Gogh forged his own emblem, and he reflected that just as other artists were linked with specific flowers, "the sunflower is mine in a way."

Van Gogh anticipated using his sunflower paintings in various ways, including as the flanking pieces to a triptych containing a portrait of the local postman's wife. Next, we'll take a detailed look at the portrait that was meant to be the centerpiece.