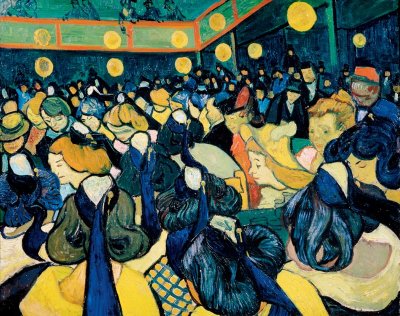 The Dance Hall by Vincent van Gogh, is housed in the Musée d'Orsay in Paris.

Vincent van Gogh completed The Dance Hall in 1888, while Paul Gauguin was living with him. In a letter to his younger brother Theo, Vincent van Gogh expressed a discomfort at the profound influence Gauguin was having on his art but admitted that he was considering the older painter's advice.

Vincent van Gogh remained profoundly attached to his need for firsthand observation of nature, but in The Dance Hall he demonstrated his ability to assimilate new aesthetic ideas. By employing a sinuous contour line that isolates each hue into a separate cell of color, van Gogh created a flat decorative effect in the synthetic manner favored by Paul Gauguin's young followers.

In late 1888, Vincent van Gogh famously mutilated his own ear. After returning from the hospital, he completed several paintings. On the next page, we'll see one of the works completed during that time.