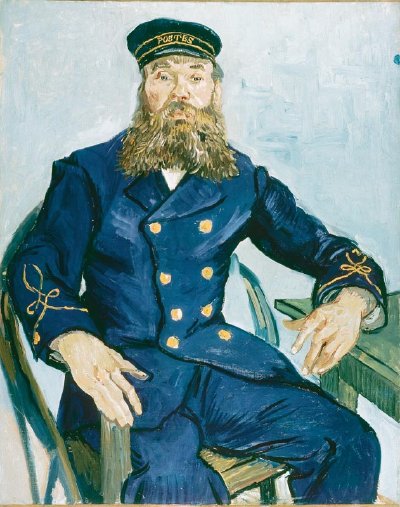 Vincent van Gogh's The Postman Joseph Roulin is an oil on canvas (32x25-3/4 inches) that is housed in the Museum of Fine Arts in Boston.

In Paris, van Gogh was often in the company of like-minded friends, whom he met in the cafés and galleries that were frequented by artists. In Arles, France, he generally was alone, but he struck up a strong friendship with Joseph Roulin and his family. Van Gogh painted several portraits of the postal worker in his official uniform, conveying his admiration for the man in the solidity of his form and the quiet dignity of his expression.

Vivid colors enhance a nightlife scene in Café Terrace on the Place du Forum, Arles, at Night. Learn about this painting in the next section.