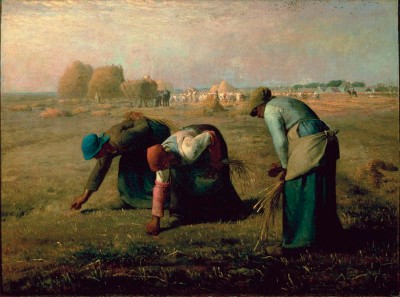 The Gleaners by Jean-Francois Millet is an oil  (32-7/8 x 43-3/4 inches), which can be  d'Orsay, Paris. See more pictures of Impressionist paintings.

struck a balance between romanticism and naturalism in his depictions of dignified agricultural laborers in a natural setting. He offered an alternative to the Salon standard and, in his own way, expressed the fugitive essence of modernity.

The subject of Jean-François Millet's The Gleaners was the village of Barbizon, on the edge of the Forest of Fontainbleau on the outskirts of Paris, which attracted a community of outdoors painters in the 1840s and 1850s.

Although Millet settled there in 1849, he rarely painted pure landscape. His approach to the subject of agricultural labor was both naturalistic and romantic, balancing the monumental forms of his farm workers with the stunning effects of natural light in the rural landscape.