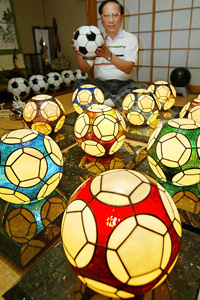 ­Even though man-made glass beads can be traced back to the ancient Egyptians and Romans, and a few surviving fragments of stained glass pieces can be dated to the ninth century, the first detailed description we have of stained glass as an art form comes to us from Theophilus, a 12th-century monk. Theophilus describes glass-making and the creation of stained glass windows in his work, "On Diverse Arts." A number of chapters in his treatise are devoted to stained glass window construction and show us the keen interest in the topic that must have existed at the time [source: Metropolitan Museum of Art].

The growing popularity of Gothic architecture, with its ability to support large, heavy stained glass designs, helped usher in a new period. Stained glass windows in churches across Europe got bigger, more complex and more majestic in the mid to late Middle Ages. It's from this period that we see many of the most masterful examples of stained glass in existence today [source: Metropolitan Museum of Art].

Changes in political and religious beliefs had a profound impact on the development of stained glass, as well as on the survival of the stained glass artwork in churches across Europe. The­ Protestant Reformation in early 16th-century Europe, the rise of Oliver Cromwell in England and the French Revolution all brought upheavals that resulted in the wanton destruction of religious art, including many irreplaceable stained glass windows. After these episodes of unrest, glass artisans sought less controversial, more lucrative work with wealthy patrons, and eventually began using more nonreligious subjects, like nature or heraldic themes in privately commissioned projects.

There have also been artistic shifts in the style and popularity of stained glass over time. The Renaissance painters of the 15th century introduced a trend toward more subtle and realistic images in art [source: Morris]. As a result, glass artists began painting on glass rather than relying heavily on colored glass and lead framing to create images. This gave them more of an opportunity to create fine detail in their work. But as a result, some of the power, brilliant color saturation and bold structure of stained glass design was lost in the process. By the beginning of the 19th century, many of the basic techniques of coloring and texturing glass had been abandoned, and stained glass had lost much of its popularity.

Now, the widespread availability of colored glass and glass cutting and shaping tools makes it easy for even novice artists to create with stained glass. Professional stained glass artists can look to new trends in modern art and the use of unexpected materials, like mirrors, to drive innovations in the stained glass of the future. Some of the limitations imposed on large stained glass pieces, like the need for strong, visible supports, may be changing too. New ways of strengthening stained glass artwork with processes like laminating are making it easier to construct bigger stained glass designs without additional bracing.

The oldest existing stained glass window dates from the 1100s and can be found at the Augsburg Cathedral in Germany.