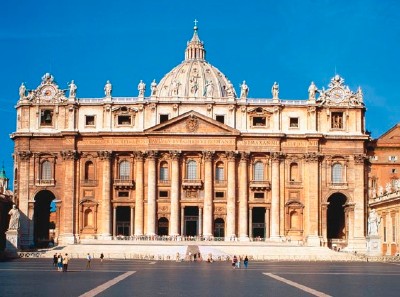 The largest church in the world and a grand symbol of papal authority, St. Peter's Basilica (completed 1626) is the crowning achievement of Michelangelo's career. Michelangelo was named its chief architect at Antonio da Sangallo's death in 1546. Before then, a number of lesser architects had been involved with the project. However, the underlying plan for the structure had been conceived by Donato Bramante, who won the commission from Pope Julius II in 1506. Bramante was an inspired architect but a poor engineer, and subsequent architects had created more problems than they had solved. Michelangelo's first step was to remove some of the later construction in order to recapture Bramante's original vision. That vision was for a mighty dome to rise from the basilica, which was in the form of a Greek cross.

Go to the next page to get a detailed view of the exterior of St. Peter's Basilica.