Creation of Eve Within the Sistine Chapel Ceiling 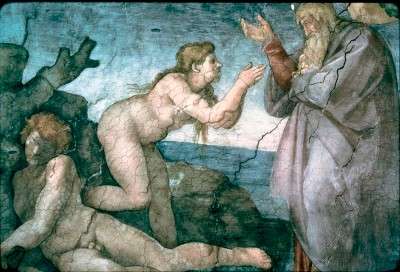 This detail shows Michelangelo's Creation of Eve (ceiling 130 feet 6 inches x 43 feet 5 inches) within the ceiling of the Sistine Chapel at the Vatican.

In Creation of Eve, Sistine ceiling (1508-12), Michelangelo depicted Eve emerging from the side of a sleeping Adam, whose head and body are supported by the trunk of a crosslike tree, no doubt an allusion to the crucifixion. This is the ceiling's first scene in which God appears in the guise of an immensely dignified and wise old man.

In the Fall of Man scene, on the next page, Michelangelo let the figures occupy all of the foreground. Read more about the innovations seen in this image.