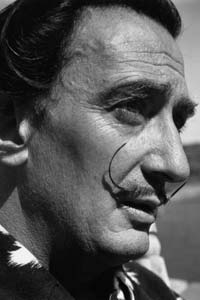 He was not, however, the first such Salvador in the family. An older brother of the same name, who was struck down at a young age -- possibly a victim of meningitis -- preceded the better-known Dalí in life. Sometimes the boy is described as being just shy of 2 years old at the time of his death and, at other times (including in Dalí's own autobiography), he is said to have been around 7. Whichever the case, Dalí's parents were particularly devastated by the loss of their firstborn. Though affectionate and extremely indulgent parents, their endless remembrances of the dead boy -- from talking about him constantly to displaying photographs of him -- apparently affected the artist greatly. They even took the second Salvador Dalí on a disturbing visit to the grave bearing his name and told him he was the original child's reincarnation. Such constant dwelling on mortality influenced the artist heavily throughout his life.

Dalí's aforementioned autobiography, "The Secret Life of Salvador Dalí," contains outrageous anecdotes that critics often discuss with fair amounts of incredulity. Dalí was noted for being eccentric, vain and narcissistic. He was fond of the good life and loved the limelight, so it's possible he simply cooked up an off-the-wall life story to sell to the public, or he could have been merely performing an exercise in Surrealistic psyche-plumbing. Or it's possible he really was a recovering necrophiliac with no qualms about physically assaulting legless old blind men, as it's been reported.

What is pretty much agreed on, however, is that whether or not Dalí lived out every extreme anecdote, he was a brilliant draughtsman and a talented writer. His creativity was noted early on, and he began painting and featuring in shows at a young age. On the next page, we'll delve deeper into the career of the man with the mustache and find out about his impact on 20th century art.